The Muskoka District is located in Ontario, Canada made up of the townships of Georgian Bay, Muskoka Lakes, Town of Huntsville, Town of Bracebridge, Town of Gravenhurst, and Lake Of Bays. The terrain is rocky and rugged because it is part of the Canadian Shield, which is rich in its mineral deposits and large forests. The trees include black and white spruce, jack pine, tamarach, poplar, white birch and balsam. Rock in the Muskokas has been dated back as far back as 1.5 billion years. Rock near this age is thought to represent part of the initial crust of the Earth. There are over 1,600 beautiful lakes making this scenic beauty become one of the most popular tourists destinations in Ontario.


First mention of Muskoka in any records is in 1615 and the territory was occupied by Indigenous People, mainly consisting of the Algonquin and Huron tribes. Early explorers to the region like Samuel De Champlain came to the area next followed by Missionaries. The name Muskoka is thought to come from the name of a Chippawa tribe chief named Mesqua Ukee which means "not easily turned back in the day of battle". It was Mesqua Ukee who signed the treaties made between the Indigenous People in Canada and Province of Canada which sold about 250,000 acres of land in the area to the Province.

To help encourage settlement to the area the Free Land Grant and Homestead Act of 1868 was created. Before this it was suggested that Muskoka be turned into a large Indigenous reservation. The realization of Muskoka's timber and the immigration of settlers into southern Ontario changed officials minds.


The Free Land Grand and Homestead Act gave 200 acres of land with extra land granted for rocky sections in Muskoka to families which meet the following conditions. The applicant had to be at lease 18 years of age and wanted to use the land for settlement and cultivation. The settler had to clear 15 acres of land, build a house at lease sixteen feet by twenty feet in size, live on the property at lease 6 months of a year for a period of 5 years. If all the requirements were met he could then apply for a land patent and become the owner. This was to stop people from land speculation. The Province retained all mineral rights to the area, including pine trees and quarry stones.

The Province would grant timber licenses to lumbermen on a settler's land. Loggers could cut trees and build logging roads across a settler's property without their permission. The Province collected timber dues on all pine timber taken down in the area, even the settlers were charged this due if they cut down more timber than their allowance. This was so profitable for the government that it was said that the dues collected paid all the administration costs for the Province. The railway provided transportation for industry, lumber and shingle mills opened up, there were so many that 13 were located on Muskoka Bay alone. Eventually the lumbermen cut down all the trees and put themselves out of business. The railway in 1878 had a station at Severn Bridge and one which is now known today as Kilworthy. The railway reached Gravenhurst in 1875 but it did not reach Bracebridge until 1885 and it reached Bala in 1907. The railway provided better transportation for tourists as the trek on the roads were still difficult. 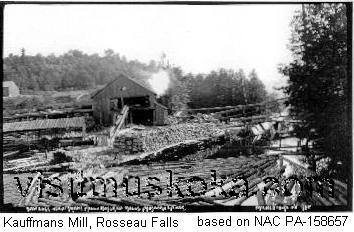